Kitten with No Tail 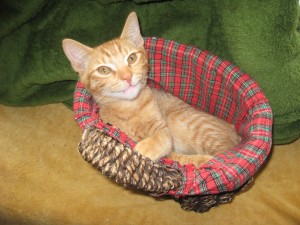 Rusty the kitten has needed quite a few of his 9 lives to make it to 3 months.  He is from a litter of five kittens dropped off to Topanga Animal Rescue with their tails cut off! It is hard to fathom such cruelty to defenseless creatures.  Rusty, curious as he is, had also suffered severe burns to his little mouth when he attempted to bite through an electrical cable.  Although deemed not likely to make it by a local veterinary clinic, Susan has the little tabby doing quite well. He has been adopted and mothered by the permanent cats at TAR.  Rusty still needs many more operations to fix the burn damage to his mouth. He is hand fed daily , but he is active and affectionate.  His spirit and spunk is an inspiration to us all.

Procedures that Rusty needs: His upper palate has two holes to the nose cavity. Another difficult surgery is needed to close them.  He is hand fed multiple times daily and then nursed gently to flush his mouth removing trapped food in the nasal cavity. He will need more surgeries in the coming months and years.

This entry was posted in Uncategorized. Bookmark the permalink.